Some interesting information has recently been revealed from a mega study that tracked and analyzed 34,680,750 results from 28,732 races in the United States. They tracked all four of the major race distances – 5km, 10km, half marathon, and full marathon. The study took an in depth look at how the health of American’s had a noticeable influence on their running performance. In the study linked above, you can see a graph that tracked data from 1996 to 2016 demonstrated that in 2016, the finish time of runners was the slowest in history. 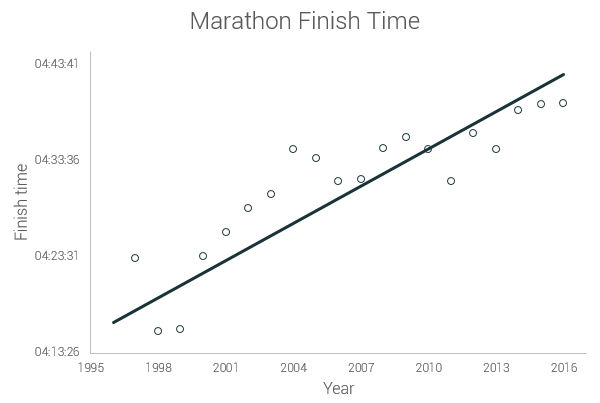 Results are 99% statistically significant, so listen up

For the purposes of this study, researches purposely chose to focus only on results in the time period mentioned above, choosing to omit database results they held covering 1902 to 2017. The 20 year time period was focused on, and only those races containing more than 2,000 runners who crossed the finish line. The researchers state that their key conclusions are 99% statistically significant for all of the most popular racing distances.

American runners are getting slower

Why runners are getting slower (hint: your health has something to do with it)

They also addressed some commonly held beliefs on why the finish times are getting slower, and disproved each of them. The first myth they address is that as running competitions gain in popularity, more people participate in them, including individuals who are not as physically fit. In actuality, in 2015 and 2016 race participant numbers declined and yet finish times also increased. 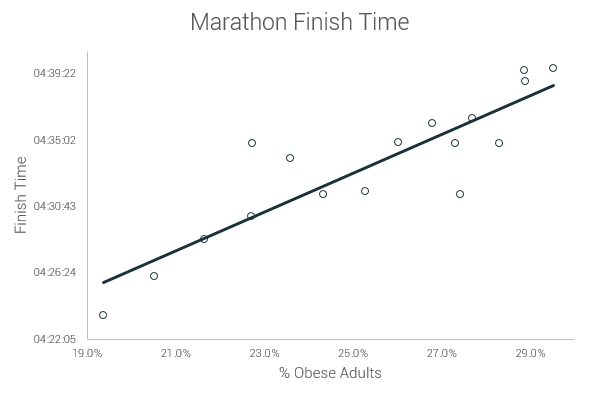 Female runners – do they have anything to do with the slower race times?

The study also looks at the idea that people who have inappropriate fitness levels simply walk the race, finding no statistically significant difference in the proportion of “runners” who finish slower compared with the average walking pace of about 19 and a half minutes per mile. They declare this argument to be invalid. The study also debunks both the myth that only the “slow are getting slower”, and the myth that it’s due to the average age of participants increasing, therefore rendering them slower. While it’s true that the races feature more elderly participants than ever, it was found that they are not the main cause of the slower finish times.

Researchers correlated the average race finish time with parameters such as adult obesity, teenage obesity, diabetes and hypertension, and the average annual medical expenditure, and discovered some clear trends. They state that “these correlations proved to be strong, 99% statistically significant, consistent, plausible, coherent and replicable in different circumstances”. To further demonstrate their findings in regards to the percentage of obese Americans and their racing performance, they included another graph tracking the results for full marathons. The trend remained consistent for all race distances, even more so for shorter distances.

Taking things a step further, they also examined the finish times of the 100th, 1,000th, and 10,000th slowest participant (separately by gender) for every year. They found that the slower participants are slowing down at a much higher rate than faster runners at a rate so great that the fast ones simply can’t compensate. Over the last 17 years, the average rate of slowing down of the slowest men was found to be 21.2%, and 13.4% for women.

A rising popularity in health and fitness could be a good thing, as more people get involved in physical activity. However, it also poses a serious health risk for individuals who are not healthy enough to rise to the challenge of marathons and other sports.

The conclusions drawn by the study are as follows: the average American runner has never been slower, (both genders includes and across all major race distances) and the effect is definitely not caused by an increase in female runners or those participants who walk or run the race at a slower pace. Signs of poor health were majorly correlated with the demonstrated decrease in speed, but more evidence is needed to establish a definite causal relationship.

Click here to see the whole study at RunRepeat.com >>

Tokens of Appreciation for Marathon Runners